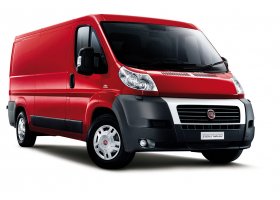 Medium wheelbase panel vans are one of the rarer species of commercial vehicle seen on our roads. But they perform a very particular function for fleets with certain needs. If you need, say, to carry loads that only just exceed the dimensions of a short-wheelbase model, it would be a waste of money to bump right up to the more common long-wheelbase van, as these titans cost more both at the front end and in fuel.

As the various manufacturers jostle to fill every single fleet needed, they’ve found that for some fleets, an ‘inbetweeney’ van like this will just fit the bill in terms of space, payload and cost. The only way to judge these vans fairly against each other is to look at the pence per mile (ppm) running costs and you’ll find these on our own website, please visit www.fleetnews.co.uk/vans to take a look around.

This month’s contenders are the Citroën Relay, Ford Transit, Fiat Ducato, Mercedes-Benz Sprinter, Nissan NV400, Peugeot boxer, Renault Master, Vauxhall Movano and Volkswagen Crafter. As with most van ranges, some of these share technology. The Relay, Ducato and Boxer are basically the same van, as are the Master and Movano, while the NV400 is a reworked Renault Master.

The Sprinter and Crafter both come off the same factory line too, although the VW has a different set of engines. For our feature this month, we have chosen a four-year/80,000-mile life cycle for our running cost comparison. All models have high roofs and weigh in at 3,000-3,500 kg gross vehicle weight. We have chosen models with a mid-range power output as these vans are likely to be carrying heavy loads, so they will need the extra power. Taking the number one slot in this sector is the Fiat Ducato which, although basically the same model as the Relay and the Boxer, has its own engine, which is more fuel-efficient and thus nudges the total ppm figure downwards. The Boxer manages to win the second slot by a small margin over the Relay, thanks to a slightly better predicted servicing, maintenance and repair (SMR) cost.

Also making a good showing is the Nissan NV40, which comes in at a cost of 46.93 pence per mile. It’s a particularly notable figure, as the Renault Master and Vauxhall Movano are basically the same van, only managing 48.70ppm and 48.38ppm respectively.

Both the Mercedes-Benz Sprinter and Volkswagen Crafter suffer from relatively higher fuel consumption, which set them apart from the front runner by 2.66ppm and 5.44ppm respectively. Meanwhile, the Renault Master suffers from a relatively high front-end cost.

The result of this number-crunching is that the worst performer, the Crafter, will cost a whopping £4,352 more to run over 80,000 miles than the Fiat Ducato.